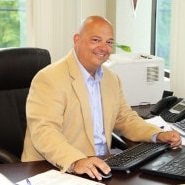 Rick began his insurance career selling life insurance for Met Life. In 2010 Rick decided to shift his focus to Property and Casualty Insurance. He joined Old Bay Insurance Agency in 2012 in pursuit of his goals. Working at Old Bay has given Rick the opportunity to build a clientele offering them the highest level of customer service with integrity and excellence.

For many years Rick and his wife Sheryle pastored a church in the Baltimore area. In 2010 after a series of personal events they decided to leave the ministry. Rick still speaks at churches when asked but his focus has been on building his insurance practice. Over the years he has been politically involved, in 2006 he ran for a seat in the Maryland General Assembly. He has served and chaired several local and national boards over the years. As a teenager Rick was a traveling musician (drummer) and currently plays drums for a Christian rock band called Wings of Glory.